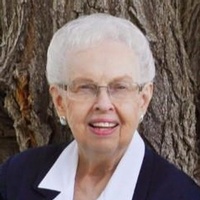 Funeral services for Carolynn Seymour will be held at 10:00 am Wednesday, June 20, 2018 at Gillette Memorial Chapel with Pastor Daryl Hilbert of Grace Baptist Church officiating, internment will follow at Black Hills National Cemetery at Sturgis, South Dakota. Visitation is from 5:00 to 7:00 pm on Tuesday June 19, 2018 at Gillette Memorial Chapel. Carolynn Nicholson Seymour, 88, of Gillette, Wyoming passed away to join her Lord & Savior, Jesus Christ June 14, 2018 at The Legacy Living and Rehabilitation Center, after a battle with Vascular Dementia. Carolynn was born May 15, 1930 in Oklahoma City, Oklahoma to Harry Lynn Nicholson and Edna Lucy Jones. She graduated from Classen High School in May of 1948 and entered the Oklahoma College for Women at Chickasha, Oklahoma, where she attended for 1 year. Carolynn met her future husband on a blind date instigated by mutual friends and they were married December 2, 1951. They had 2 daughters, Denice & Deanna. Delmar was in the Army so they moved around some with his deployments. After being discharged from the Army, Delmar started working for Flint Engineering and was transferred to several places. They lived in San Antonio, Texas, El Dorado, Kansas, Canada, Kimball, Nebraska and finally settled in Lindsay, Oklahoma where the girls attended school.  Carolynn was a Girl Scout leader for Denice’s Girl Scout Troop for 2 years.  Carolynn, Delmar and Deanna moved to Gillette the summer of 1974, Denice followed a few months later. The family joined Westside Baptist Church where Carolynn and Delmar were members for over 40 years. She was an avid collector of teapots and tea tiles. At the time of her passing she had over 150 of them. In 1978 she and her family took a trip to Hawaii and it was on of her favorite memories. She fortunately was able to return in 2015. She also enjoyed listening to classical music.  Carolynn is preceded in death by her parents, her sister and her husband of 58 years. She is survived by her two daughters, Denice (Jerry) Roush, Deanna (Tom) Dietz, 8 grandchildren, David Roush, Darcy (Tony) Hanson, Dana Dietz, TJ (Ashly) Dietz, Nicole Dietz, Anna (Drake) Kent, Amanda Dietz and Andrew Dietz, and 9 great-grandchildren. A memorial may be made in Carolynn’s name to The Gideons International. Memorials and condolences may be sent in care of Gillette Memorial Chapel 210 West 5th Street, Gillette, WY 82716. Condolences may also be expressed at www.gillettememorialchapel.com

To order memorial trees or send flowers to the family in memory of Carolynn Seymour, please visit our flower store.