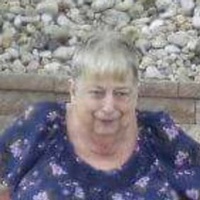 Memorial service for Caroline Oller will be held Saturday March 3, 2018 at the WPA building in Cam-Plex Park from 1pm-4pm it is a Potluck. Family requests plants instead of flowers. Caroline Oller 74 of Gillette passed away on February 23 2018 at Close To Home Hospice after a short battle with cancer. Caroline Oller was born in Pontiac, MI to Daniel and Virginia (Coats) Wilson on August 10, 1943. Later the family moved to Southern California where she did her growing up. She attended El Monte High School where she graduated from in 1961 and where she the met the love of her life, Delmar Charles Oller. In the 1963, she married Delmar. Together from the union of their marriage they had five children.  Caroline became a CNA in California where she worked for 25 years. Later she lost her husband in a tragic oilfield accident in 1980. She then moved to Gillette 1989 to be closer to her son. Caroline then made Gillette her home by working at Walmart and later retired. Her greatest passions were playing Bingo in downtown Gillette and spending time with her family, she especially loved spending time with her grandchildren and great- grandchildren. Caroline was always a kind loving person and like to make small talk with her bingo ladies. She also loved to watch crime shows on TV and nap in her recliner. Mrs. Oller was survived by  her brother, David Wilson  of Fallon, NV; her sister, Dianna Berlin of Oxnard, California; her son Dallas Oller of Gillette; Alvin Oller of CO; Rodrick Oller of Gillette;  and daughter; Virginia Lees of Gillette; 12 grandchildren and 18 great-grandchildren; numerous nieces and nephews. She was proceeded in death by her father, Daniel Wilson; mother; Virginia (Coats) Wilson; brother, Russel Wilson; brother, Dallas Wilson; husband, Delmar Oller; son Mark Oller; grandson, Patrick Lees; and great-grandson, Johnathan McDiarmid. Memorials and condolences may be sent in care of Walker Funeral Home 410 Medical Arts Court, Gillette, WY 82716. Condolences may also be expressed at www.walkerfuneralgillette.com
To order memorial trees or send flowers to the family in memory of Caroline Irene Oller, please visit our flower store.