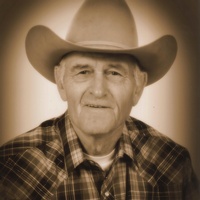 Bud Pack, 89, of Rapid City SD, formerly of Gillette WY left us on July 31,          2018.  Bud was born April 25, 1929 in Gillette WY to Dallas Kathryn (Stephenson) and Donald Edward Pack.  On January 9, 1959 he married Reatha Ree Foard of Hardin MT in Stevensville MT.  Bud worked for Lynn Tarver until he and Reatha moved to Elk Creek to ranch. In 1964 the family moved to Pine River MN where he owned the Bridle Bit Rodeo Co. and produced rodeos for three years along with participating in events.  In 1973 they moved to Rapid City where they made their home.  Bud went to work in construction, later owning R & R Ditching.  He was a talented musician and an accomplished song writer and had a band called Country Guitars for many years. He also co-wrote several songs with Ellie Stevens, this one being one of his favorites; “Till I see Mama Again” recorded by his very good friend Donnie Williams.

Bud accomplished in life something that very few old cowboys do and that was designing and holding two patents and a trademark for his invention of the Par-T-Pump which he was very proud of. Every idea he had he stuck to it until it was a creation.

He was preceded in death by his parents, sisters Donaldena and Beulah, brothers Roy and Ernie.

A visitation will be held on Friday, August 3, 2018, starting at 8:00am followed by a funeral service at 9:00am at Osheim & Schmidt Funeral Home in Rapid City.

A visitation will be held at 9:00am on Saturday, August 4, 2018 at the Gillette Memorial Chapel followed by a funeral service at 10:00 am.  Interment will follow at the Mt Pisgah Cemetery.

Friends may sign his online guest register at www.gillettememorialchapel.com or www.osheimschmidt.com
To order memorial trees or send flowers to the family in memory of Bud Pack, please visit our flower store.