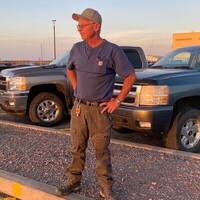 Bradley A. Sayre, 56 of Wright, WY passed away unexpectedly, October 16, 2022, at his home.  Memorial services will be held November 5, 2022 at 1:00pm at the Gillette Memorial Chapel.  A second service will be held at a later date in Mitchell, NE. Brad was born January 12, 1966 to Duane W and Darlene (Helling) Sayre in Scottsbluff, NE.  Brad attended school at Fairview 34 until the 8th grade and then attended Morrill High School.  After school, Brad worked doing various jobs until he moved to Savannah, GA, driving truck for a few years before moving back to Mitchell, NE.  Brad married Brandi K Green February 14, 1995.  With this union, Brad became a father to Nicholas.  Brad worked for Western Engineering Co for 15 years.  With his love and passion for running big equipment, Brad moved to Wright, WY in 2004 and began working at the Cordero Mine, until his passing.  Brad loved his job and loved the people he worked with.  He would always brag about how much of a smooth shovel operator he was.  He also enjoyed running dozers if he wasn’t assigned to being a truck driver for his shift.  Brad enjoyed baking, making jelly, and canning various things. In his free time, Brad was always making something, He loved to experiment with different recipes, and enjoyed getting ideas and help from family and friends on new things.  He was proud of himself for everything he made, and he loved sharing his baked goods and jellies with family, friends, and co-workers.  He was the “Betty Crocker” of all who knew him.  His most recent thing he took on was learning how to make tamales and making a batch on his own. Brad loved spending time with family and friends.  He always enjoyed phone conversations he and his brother-in-law Bob, would have several times a week.  Every chance he had, Brad would come back to the valley to visit, making sure to visit as many people as he could.  Brad enjoyed NASCAR and even attending NASCAR race, he was always excited to be able to attend his niece Kiara’s basketball games as well as watching his cousin Dru Kuxhausen play basketball.  He was a fan of the Nebraska Cornhuskers and the Denver Broncos.  Brad especially enjoyed time with his son, Nicholas.  Nicholas was Brad’s pride and joy.  Brad and Nicholas spent a lot of time doing what a father and son would do, they enjoyed fishing, hunting, going to drag races, watching football, watching NASCAR or just hanging out together.  Brad was generous, happy and loved life.  He was the most loving and kind person you could run into. He had friends across Wyoming, Nebraska, Iowa, and maybe beyond, he always had a smile on his face and was loved by many.  He will be deeply missed by all who knew him. Survivors include his son, Nicholas (Fiancé, Brook, and her son Brysen); sister, Dana (Bob) Green; mother of Nicholas, Brandi Green; sister-in-law, Nicole (Paul) Aguallo; nephews, Justin and Kolton and niece Kiara.  Along with numerous aunts, uncles, cousins, extended family and friends. Brad is preceded in death by both parents Duane and Darlene (Helling) Sayre; his maternal and paternal grandparents, several aunts, uncles and cousins from both sides of his family, mother-in-law, Sherryl Green; and other close extended family members.   In lieu of flowers, memorials may be made to Nicholas Green; and sent in care of Gillette Memorial Chapel 210 West 5th Street, Gillette, WY 82716,,  Memorials will be used for funeral expenses. Condolences may also be expressed at www.gillettememorialchapel.com

To order memorial trees or send flowers to the family in memory of Bradley Alan Sayre, please visit our flower store.