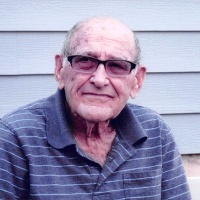 Bob was born in Wray, CO on September 5, 1931 the oldest of four children to David and Goldie (Baker) Cooper.  Bob was a very soft hearted person who was willing to help anyone in need.

Growing up he worked with his dad on construction projects and eventually started a drywall business before going to work at Bel Ayr mine in 1978.  Bob retired from mining in 1988.

To order memorial trees or send flowers to the family in memory of Bobbie "Bob" G. Cooper, please visit our flower store.