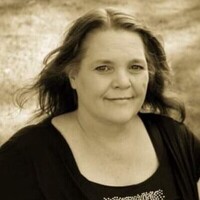 Memorial service for Bobbi Underwood will be held at 1:00 p.m., Monday, September 19, 2022 at Gillette Memorial Chapel, inurnment to follow at Mt. Pisgah Cemetery. It is with great sadness that the family of Bobbi Jo Underwood announces her passing after a tragic automobile accident, on September 12, 2022, at the age of 54. Bobbi Jo was born to loving parents, Linda and Robert Tullis on January 15, 1968 in Steubenville, Ohio. She moved to Gillette, Wyoming with her family in 1980 when she was 12 years old. Bobbi attended Campbell County High School where she graduated in 1986. She was blessed with her daughter, Ashley in 1993. The two were best friends and would talk on the phone every day. Ashley and Michael welcomed their son, Kade in 2012, making Bobbi the proudest Amma. She flourished in her new role and loved spending time with Kade, spoiling him, and cheering him on at his football games. Anyone who had the privilege of knowing Bobbi Jo knew her loving and generous heart. She would help anyone she ever met, no questions asked. She loved cooking and would cook anyone she has ever met a birthday dinner. She was a loving mother, amma, daughter, partner, sister, aunt, and friend. She had a large family and will be missed more than words can express. She is survived by her parents, Robert and Linda Tullis; her siblings, Shelley and Jim Martens, and Jodi Flanders; her daughter, Ashley Underwood and Michael Johnson; her grandson, Kade Johnson; her partner, David Gould; her nieces and nephews, Ryan Tullis, Courtney and Matt Oshanick, Nicole and Rex Lyon, Shyla and Colton Hutchinson, Chancey Hayden, Dyson Flanders, Taylee Flanders and Matt Stevens, Jamie Tullis, Robert and Megan Granzer, Timothy and Carissa Granzer, Jesse Granzer and Cheyenne Kersnick, along with a number of great nieces, nephews, and friends. Bobbi Jo was preceded in death by her older sister, Kimberly Granzer; Grandparents Anna and Harry Smith, and Clara and Ralph Tullis, along with numerous aunts and uncles. Memorials and condolences may be sent in care of Gillette Memorial Chapel 210 West 5th Street, Gillette, WY 82716. Condolences may also be expressed at www.gillettememorialchapel.com

To order memorial trees or send flowers to the family in memory of Bobbi Jo Underwood, please visit our flower store.