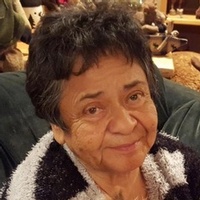 Mass of Christian Burial for Betty Ann Martinez will be 10:00 a. m. Friday, December 7, 2018 at St. Matthew’s Catholic Church in Gillette with Burial to follow at Mount Pisgah Cemetery. Walker Funeral Home will host Visitation from 4:00-6:00 p.m. on Thursday with a Vigil starting at 6:00 p.m. Betty Martinez, 71 a longtime resident of Gillette, WY passed away on November 27, 2018 at Old Cheney Rehabilitation in Lincoln, NE with her daughter Nancy by her side.

Betty Ann Martinez was born to Salvador and Josephine (Diaz) Martinez on November 13, 1947 in Julesburg, CO.  Her family soon moved to Kimball, NE where Betty grew up and had many fond memories of adventures with her siblings. She graduated from Kimball High School in 1965. She spent time in Denver, CO as a nanny and attended business school before returning to Kimball. Betty followed her family to Gillette in 1970, where she worked at the A&W. In May 1971, Betty welcomed her only daughter, Nancy into the world. Betty and Nancy soon ventured to Laramie, WY where Betty graduated from the University of Wyoming in May 1977 with her teaching degree.  Betty taught high school Business classes at Saratoga High School, Saratoga, WY from 1977-1979, she was also a cheerleading and FBLA sponsor. In 1979, Betty and her daughter returned to Gillette where she began her career at The Carter Mining Co., as Mine Manager Secretary and later transferring to Employee Relations – she worked at both Caballo and Rawhide mines and the main office in Gillette and continued her employment with Peabody Energy after the acquisition.  Betty volunteered with numerous Gillette organizations – Court Appointed Special Advocates (CASA), Patient Advocate for Dialysis Unit at Campbell County Memorial Hospital, St. Matthews Catholic Church, John Paul II Catholic School, and TCW Catholic Women and also National Associations – Society for Human Resource Management (SHRM) and ESRD Network 15.

In 2009, she began her medical voyage with dialysis after a near death experience. On August 31, 2017, Betty received a kidney transplant at Porter Adventist Hospital in Denver, CO.  Betty represented dialysis patients in Wyoming on both Network 15’s Patient Advisory Committee (serving six southwestern states) and represented patients nationally on the National Patient and Family Engagement (PFE) Learning and Action Network (LAN).  She advocated fiercely for great patient care including serving on the National PFE LANs to decrease patient infections (Health Acquired Infection Group), and to increase transplants.  She was also chosen on three separate occasions to speak directly with CMS to represent current patient concerns and discuss/represent being a dialysis patient.  As part of the Patient Advisory Committee, she helped design a “Patient to Patient. . .Let’s Talk About Fluids” booklet and laminated lab cards for dialysis patients to help patients understand their lab values.

Betty enjoyed playing volleyball for many years at the Rec Center, when she wasn’t playing she was on the sidelines reffing. She spent many hours of her life on bleachers watching her daughter, nieces, nephews, and grandkids play all kinds of sports and dance recitals. She spent many hours on the road traveling to different venues to watch and most of the time taking her parents with her. She always had a smile on her face and one to give away.

In lieu of flowers the family has established a memorial in Betty’s name. Donations will be for multiple non-profit organizations. Memorial and condolences may be sent in care of Walker Funeral Home, 410 Medical Arts Court, Gillette, WY 82716. Condolences may also be expressed at www.walkerfuneralgillette.com

To order memorial trees or send flowers to the family in memory of Betty Ann Martinez, please visit our flower store.