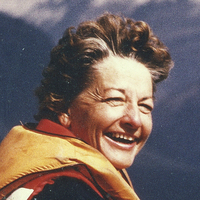 She was born Oct. 14, 1929, in Niobrara, Nebraska, to Dr. Carl Raymond and Lula (Hart) Green. She grew up in Niobrara, then moved with her mother and sister while in grade school to Lincoln, Nebraska. She graduated from Northeast High School in 1947 and then studied at the University of Nebraska, graduating in 1951 with a bachelor’s degree in journalism.

While at the university, she met Bruce M. Kennedy of Basin, Wyoming, when he decided to sit next to “the prettiest girl in the class.” They were married March, 18, 1951. During the time he served during the Korean War, she worked at the Ogallala, Nebraska, newspaper. After he returned from his service, they worked together at newspapers in Neligh, Nebraska, and then Lander, Wyoming. They moved to Greybull, Wyoming, in 1955 to begin work at the Greybull Standard, a newspaper they bought in 1959 and ran together for several decades.

In the 1970s and 1980s, they bought a dozen other newspapers in Wyoming and Montana, and created Sage Publishing, which continues to operate newspapers in Cody, Douglas, Gillette and Glenrock.

Bruce died in 1992, and for the next 29 years, Betty continued to publish their newspapers. At the time of her death, only one person had been involved in Wyoming newspapers longer than her. While Bruce received many accolades for his work, he always said he couldn’t have done any of it without Betty’s help, support and astute advice. They had three children, Brian, Ann and Bob — all of whom followed them into careers in newspapering. With their love and support, Betty and Bruce created a utopia for their children.

Betty lived in Greybull until 2019, when she moved to Gillette to live with her daughter Ann and son-in-law Bill. She moved to the Legacy in April.

There were few things that she couldn’t do when she put her mind to it. She maintained their 100 acres for 27 years after Bruce’s death, and still mowed their spacious lawn until she was 88. She fed his remaining horses twice a day through the winter for two decades. She learned to downhill ski at the new Antelope Butte Ski Area in 1966 and enjoyed skiing there into her late 70s. She also took up cross-country skiing late in life.
Their home was testament to her green thumb. She turned rocky soil into a garden paradise, growing vegetables, annuals and perennials in abundance. She knew all of them by name, both the botanical name and the more common name. Inside the house in 1963, she built an atrium and filled it and every other room with potted plants, growing many of them from seed in the days before plants were available in stores.

She was a friend to all animals over the years, but especially dogs, with whom she had a special kinship. She loved to sit and look out her windows to see the different wildlife that would appear, from birds, to squirrels, to turkeys, to deer and even an occasional fox or heron.

She was a crossword puzzle aficionado and a voracious reader, consuming several newspapers a day and always having a few magazines or books nearby. She took up many hobbies during her lifetime, and started running in her 50s, finishing several 5Ks. She hiked many mountains in the Big Horns with her dog, Trudy, and rode horseback into the Cloud Peak Wilderness several times with Bruce and the kids. She was an accomplished cook, even though she hated it, and she always — always — enjoyed a glass of white wine in the evening. She remained a Cornhusker fan until the end. She was a member of the First Presbyterian Church of Greybull, Tri Delta sorority and PEO.

She was proud of her Swedish heritage and the hard work done by her mother and grandmother to support their families. She repeated their stories to her children, often with her grandmother’s admonition, “Life wasn’t meant to be easy.” She was an inspiration as a mother and as a mentor to her children, and the most wonderful grandmother in every way possible to her grandchildren.

She was preceded in death by her husband and her sister, Helen Baird.

Private family services will be held at a later date.

In lieu of flowers, memorials can be made to the Alzheimer’s Association or memory care group, an animal care facility or the charity of one’s choice. Condolences may be sent to Walker Funeral Home, 410 Medical Arts Court, Gillette, WY 82716 or online at walkerfuneralgillette.com.
To order memorial trees or send flowers to the family in memory of Betty G. Kennedy, please visit our flower store.