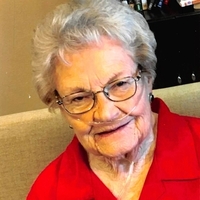 Betty Jean (Kirkhart) Benedick passed to her heavenly home December 12 at The Legacy Living and Rehabilitation Center from COVID complications. Betty was born October 2, 1933 in Partridge, KS to Zebulon LeRoy Kirkhart and Erma Emma (Sparks) Kirkhart. On December 24, 1949, she married Larry Benedick and to this union three children were born.  She graduated from high school in May 1951 from Codell High School in Codell, Kansas. She was a stay at home mother while the children were young. After she and Larry relocated to Gillette in 1965, she began working at the George Amos Memorial Library.Betty lived in many different communities throughout her life moving wherever the oilfield work took them. They moved from Gillette in 1976 to Liberal Kansas and shortly after to Hays, Kansas. In 1985, Betty and Larry divorced, and she relocated to Gillette. She worked at the Campbell County Public Library until retiring and then she became a caregiver for a number of Campbell ranching pioneer families including the Appel, Lynde and Saunders families. She enjoyed the Kansas River Rat reunions and reuniting with childhood and lifelong friends.  She was very proud of her ties with her home state of Kansas. Betty was always ready to play a game of Slap Jack with her grandkids. She enjoyed being a part of Bible Studies and Red Hat’s. She enjoyed her flower gardens and planting new flower species each year; however, those dang squirrels were not friendly to her tomatoes. She is survived by her children, Vickie Schmidt (Tom-Deceased) of Gillette, Ken Benedick (Charlie) of Casper, and Nicki Toth (Tim) of Upton, her brother, Don Kirkhart of Yuma, AZ and sister, Barbara” Punkin” Beckley of Cedar Ridge, CO.  Her grandchildren, Jory Schmidt, Stacey (Nickolas) Slocum, Shauna (Shawn) Oleson, Amy (Brent) Uhrich, Valerie (Rylan) Johnson, Brian (Destine) Nelson, Lindsay (Jordan) Kalinowski, Erik Toth, Logan (Crystal) Toth and Maci Toth, twenty-four great grandchildren, one great-great grandchild and her close friend, Gloria Cole. She was preceded in death by her parents, her special friend, Jim Anderson, son-in-law, Tom Schmidt and great grand daughters, Molli Toth and Miiralynne Williams.

To order memorial trees or send flowers to the family in memory of Betty Jean Benedick, please visit our flower store.