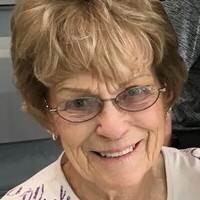 Funeral service for Betty Anderson will be held at 1:00 p.m., Saturday, December 18, 2021 at Holy Trinity Episcopal Church with Rev. Lin Davenport officiating; interment to follow at Mt. Pisgah Cemetery. On February 10, 1933, a daughter was born to LaRoy and Edna McCray in Hot Springs, South Dakota. They named her Betty Lou, and she joined a sister, Shirley Jean. Betty Lou spent all her school years in Hot Springs walking a couple of miles and crossing a creek only to be faced with over a hundred stairs up a hill to her school. In high school, she was a cheerleader and homecoming royalty while working at a downtown drug store. In 1949, she married Johnny Anderson in Raton, New Mexico. When the couple returned to Hot Springs, Betty Lou finished school a year early because she sneaked into a higher-grade classroom. The high school thought their records were wrong and allowed her to stay. After high school, Betty Lou and Johnny built their own house and started a family. Nicky Lynn was born in 1951, followed by her brother, Robin Lee, in 1953, and a sister Dawn Ree, in 1955. A year later the family moved to Gillette, Wyoming for Johnny to work in a uranium mine. They added Norma Jean to the family in 1958 and Lou Michael in 1964. Betty Lou and Johnny bought Culligan Soft Water and built a building which also housed their laundromat. After closing the laundromat, they opened Wyoming Tropical Shop in its place. Both of them worked in their businesses until they sold them and retired. Betty Lou enjoyed such activities as elk hunting, ball games, snowmobiling, traveling, and fishing. She absolutely loved to dance. The couple bought land near Keyhole and transformed it into a great retreat often hosting family barbecues. With five children, Nicky Spangler, Rob Anderson, Dawn Suchor (Joe), Norma Hanson (Tracy), and Louie Anderson, they were blessed with eleven grandchildren; Jed Spangler (Ayla), Styl Spangler (Jenni), Brad Anderson, Christa Anderson (Jason), Heidi Suchor Uhrig (Jason), Hayley Suchor Renken (Chad), Mindy Suchor, Kodey Kanard (Danelle), Kasey Connolly, Aaron Anderson, and Lacie Anderson Mathisen (Danny). This brought thirteen great grandchildren whom they thoroughly adored. A few years after Johnny passed away, Betty Lou and Gary Kummerfeld rekindled an old friendship. They went on road trips and attended events with both families. The two of them planted a garden and fixed fence on Gary’s ranch. Betty Lou and Gary traveled back and forth to Gary’s winter home in Las Vegas where they enjoyed hiking. Betty Lou, an avid Denver Broncos fan, maintained a long-distance betting competition against Gary. They bet a dollar on every football game. Those dollars flew through the mail! Betty Lou Anderson was preceded in death by an infant son John Shane, her parents, her sister, and her husband. The family requests any memorials be made to Betty Lou’s church, Holy Trinity Episcopal, or St. Jude’s. Memorials and condolences may be sent in care of Gillette Memorial Chapel 210 West 5th Street, Gillette, WY 82716. Condolences may also be expressed at www.gillettememorialchapel.com

To order memorial trees or send flowers to the family in memory of Betty Lou Anderson, please visit our flower store.