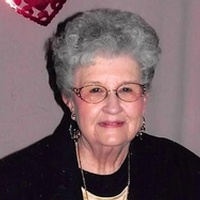 Funeral services for Bess Enlund will be held at 1:00 p.m., Thursday, December 13, 2018 at Gillette Memorial Chapel ; with Pastor Dan Holden officiating. Following the service, Bess will be transferred to Buffalo, MO for interment next to her husband at Lindley Church cemetery. Bess M. Enlund, 92, passed away on Saturday morning, December 9, 2018 at Campbell County Memorial Hospital from a stroke caused by a brain aneurysm. Bessie Marie (Adams) Enlund was born on November 8, 1926 in Lees Summit, MO to Clyde M. Adams and Beulah Goldie (Anderson) Adams.  She was an only child for the first 12 years of her life.  Her mother was a teacher in a one-room schoolhouse and her dad farmed.  When she was a youngster, her family moved to Colorado.  Bess was 8 years old when her mother died and her father remarried 4 years later. The new marriage resulted in 2 stepbrothers and 5 stepsisters. Bess spent her summers in Buffalo, MO with her aunts and uncles and summers in Gilcrest, CO with her father and stepmother. At the age of 17, Bess moved to Cheyenne, WY to become a hairdresser.  It was in Cheyenne that she met a handsome serviceman named Ray Enlund.  Bess and Ray were married in 1950 and moved to Davenport, IA.  In the following years, Bess and Ray had 3 children:  Christine (Enlund) Baity 1953, Sandra Rae (Enlund) Phillips 1954, and Jeffrey Lynn Enlund 1956.  Over the years, the family moved to various cities including: Moline, IL; Rock Island, IL; Greeley, CO; Cheyenne, WY; and Gillette, WY in 1969.  For many years, Bess worked at Decker’s Food Center as a baker and Ray worked for Dowell Chemical Co.  In 1990, after Bess and Ray retired, they moved to Buffalo, MO where they purchased a 40 acre ranch and cattle.  Her son, Jeff, moved to Buffalo, as well, and purchased a 70-acre-farm nearby.  Bess and Ray continued on the farm until Ray passed away in 1999.  Bess stayed a couple of years on the farm alone until she sold it and moved into an apartment.  In 2014, Bess’ son, Jeff, passed away, so her daughters moved her to Gillette.  Bess lived with Sandy Phillips for 3 years and then moved to an assisted living facility where she stayed until her death. Bess was a very hard-working woman all her life.  She often spent time caring for her elderly relatives or going fishing with her husband.  She had few hobbies but dearly loved watching old westerns on TV or going out to eat with her friends. Bess is preceded in death by her husband, Ray, and son, Jeff.  She is survived by her 2 daughters, Chris Baity and Sandy Phillips, five grandchildren, 12 great-grandchildren, and one great-great-grandson. Memorials and condolences may be sent in care of Gillette Memorial Chapel 210 West 5th Street, Gillette, WY 82716. Condolences may also be expressed at www.gillettememorialchapel.com

To order memorial trees or send flowers to the family in memory of Bessie Marie Enlund, please visit our flower store.