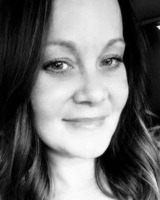 On Monday, February 28, 2022, Ashlei Elizabeth (Swesey) Egberto, a loving mother, wife, daughter, sister, aunt and friend, passed away due to complications from Asthma at the young age of 37 in Loveland, CO surrounded by her family and loved ones.  A Celebration of Life will be held at 11:00 a.m., Monday, March 7, 2022, at Gillette Memorial Chapel with Pastor Dan Holden officiating. Ashlei was born on January 11, 1985 in Sheridan, WY to Everett Swesey and Lori (Comer) Young. She was raised and educated in Gillette, WY. She attended Sunflower and Stocktrail Elementary, Twin Spruce Junior High and graduated from Campbell County High School in 2002. In January of 2006 she met her lifelong partner, Brett Egberto. The couple welcomed their first daughter, Macei Jill, on October 24, 2006. That day was the first time Ashlei was put on the ventilator. Then another daughter, Mckynlei Jade was born on January 20, 2009. Ashlei had worked at several different places but her all-time favorite job was being a mom. She has spent the past fifteen years in and out of the hospital and on and off the ventilator. She had over 37 life flights and was on the ventilator over 35 times. Each time was able to fight and overcome each battle. This past month, she shared with her family her last wishes and she knew her time here was limited. Ashlei enjoyed camping with her family, listening to country music, attending concerts, watching Dr. Phil, reality tv shows and shopping sprees. If you ever had a chance to look in her purse you would find her inhaler, chapstick, lotion, butt wipes, two-day old tacos and the most important asset of hers, a bottle of ranch. She enjoyed spending time with her two daughters, Macei and McKynlei, and stepdaughter, Valerie, as well as her nieces, Izabella, Jordyn, Abigayle, Ali, Brie, Autumn and Adalee and her nephews Xaieden, Izaak, Aidyn, Elijah, Brock, Jeremiah and Axton. She was extremely proud of her nephew Izaak who is currently serving in the Navy stationed in San Diego, CA. She loved supporting the people around her. Ashlei is survived by her life partner, Brett Egberto; her beautiful daughters, Macei Jill and Mckynlei Jade; her mother, Lori (Comer) Young; her maternal Grandma Louise Comer; her uncle Mike (Trish) Comer; her aunt April (Bruce) Stewart; her sisters, Angela (Jay) Hodge; Autumn Williams; Mother-in-law, Cyndy Egberto; Great Aunt Shari Bugher; Brothers in laws, Brock Matlock, Travis Egberto; Sisters in laws, Ashley Matlock, Courtney Swindle, Hannah Swindle and several nieces and nephews. Ashlei was preceded in death by her dads, Everett Swesey and Butch Young; her father-in-law, Ricky Egberto; her grandfathers, Billy Swesey and Jack Comer; her grandma, Connie Matlock; her uncle, Pat Comer. In Lieu of flowers, memorials and condolences may be sent in care of Gillette Memorial Chapel, 210 West 5th Street, Gillette, WY  82716 or Campco Federal Credit Union in the name of Macei and Mckynlei Egberto. Condolences may also be expressed at www.gillettememorialchapel.com. Casual attire is requested.

To order memorial trees or send flowers to the family in memory of Ashlei Elizabeth Egberto, please visit our flower store.