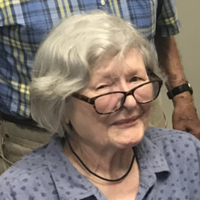 Ardis Ruth Hood passed away December 22, 2020 at The Legacy Living and Rehabilitation Center in Gillette, Wyoming from complications of COVID.  Ardis was born September 25, 1935 in Scottsbluff, Nebraska. Her parents Alfred and Marie Hinze raised Ardis and her four siblings in Greeley, Colorado, where they instilled high value for education and community involvement underscored by a deep sense of personal integrity. She moved to Abilene, Texas in 1969 where she met and married Dan Hood, her loving husband of 47 years. They moved to Amarillo, Texas in 1982; Ruidoso, New Mexico in 1997; and Gillette, Wyoming in 2016 to be near grandchildren.

Ardis’ life is a testament for her desire to see fine and performing arts flourish. Her beautiful soprano voice contributed to enumerable choral concerts, philharmonic productions, chamber choirs, church choirs, operas, as well as high school and college productions. Her voice was exceptional in power and emotion, able to carry above entire orchestras.

Ardis made a living in the field of Commercial Art as a designer, illustrator, and advertising-agency Art Director. She taught graphic design and illustration at the post-secondary level and offered clinics and workshops throughout decades of her career. Ardis produced remarkable fine artwork, being especially gifted with ink, colored pencil, and pastels. Her works displayed fascination with patterns and textures, often with a degree of subtle wit. Her fine art garnered many “Firsts” and “Best of Show” awards in juried competitions, and her work appears in corporate and private collections throughout the United States.

She is survived by her husband, musician and educator Dan Hood. She and Dan were a dynamic match in intelligence, wit, and creativity. They contributed to the local art culture everywhere they lived. Ardis and Dan were generous with their talents and gifted in identifying and mentoring/growing/developing the artistic talents in others. Countless people discovered and matured their gifts because of the Hoods.

Ardis lives on. Her children and grandchildren were blessed to grow up in the beauty she created around her, and enumerable people across generations and states are painting and drawing because of her. It is impossible to list those who miss her. At the center of those who love her are her children Matthew Craig (Kate) of Gillette, Wyoming, and Laura Craig (Mike Peeples) of Abilene, Texas; three siblings, Greg Hinze (Judy), Mark Hinze (Betty), and Mary Lee Lane; Brothers and Sisters-in-Law, Jan and Ed Broom, Dale and Linda Hood; eight grandchildren and three great-grandchildren. She is preceded in death by her parents, Alfred and Marie Hinze, parents-in-law Sam and Geraldine Hood, and sister Carlene Heaps (Bill), and brother-in-Law Dwayne Hood.

Per Ardis’ request no services will be held. Memorials and condolences may be sent in care of Walker Funeral Home 410 Medical Arts Court, Gillette, WY 82716.  Condolences may also be expressed at www.walkerfuneralgillette.com . Donations are suggested to benefit St. Judes or Ardis would love if you contribute to the arts in your local community.

To order memorial trees or send flowers to the family in memory of Ardis Ruth Hood, please visit our flower store.