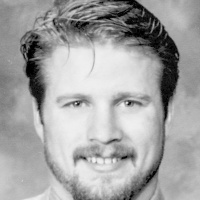 Anthony Richard Koch, 49, of Gillette, died Wednesday, Aug. 14, 2019, at his father’s home. Anthony "Tony" was born Aug. 14, 1969, in Edina, Minnesota, the oldest son of Patricia (Anderson) Bertch and the late Richard Koch. After the family moved to Gillette in 1974, he attended Hillcrest Elementary School, Twin Spruce and Sage Valley junior highs, and Campbell County High School, where he graduated in 1987.After graduation, he stayed in Gillette to work and play one more season of Roughrider baseball since he was only 17 when he graduated. He loved the sport of baseball and he and his brother, Barry, could often be found one at the catcher’s position and the other on the pitcher’s mound. He and Barry were the best of friends. In 1988, Gillette was going through one of its recessions and work was scarce. He had some interest from a few small colleges to play baseball, but eventually decided to enlist in the Army in 1989. He completed Boot Camp at Fort Leonard Wood, Missouri, and then went on to Fort Stewart, Georgia, as his permanent duty station. He was a combat engineer in the 92nd Engineer Battalion. His platoon was deployed to the Bahamas for two months to work on a construction project. When he got back to the states, he was deployed again in October 1990 to the Gulf War for Operation Desert Storm. He enjoyed the military and thrived in the structure. He said that he could never have fought for a better set of generals and administration. When he returned stateside, he reunited with his high school sweetheart, Dina Dodge. They married in June 1991. Once married, he decided not to re-enlist. They moved to Chandler, Arizona, after he was honorably discharged. They divorced after five years. In Arizona, he worked for Microchip Technology and had also went to school for an associate degree during his time there.In May 2001, he decided to move back home while Gillette was booming again. He worked as a consultant for William’s Production. In August 2003, he married Lori Couch. She passed away after a long battle with laryngeal cancer in December 2016. Since 2011, he was employed with Wood Wireline until his passing. He was thankful for the opportunity to work in such a caring environment. He was an absolute sports fanatic. He followed baseball so closely he could tell you times, dates and stats off the top of his head, dating back decades. He loved the Dodgers dearly and since he was a young boy has never wavered from the purple and gold of the Minnesota Vikings. He was a longtime member of the Fraternal Order of Eagles, where he shared many memories with his close friends. Tony is survived by parents, Patricia and Gene Bertch of Gillette; sisters, Camron (Vince) Davis and Nicole (Tony) Merchen of Gillette; nieces and nephews, Veronica Koch (Nate Bronson), Devan (Darnell) Douglas, Steven Koch, Clayton Koch, Brandon Koch, Morgan Merchen and Baiden Luderman; maternal grandmother, Helen Rackerby of Brookings, South Dakota; girlfriend, Kodi Marsh; as well as many aunts, uncles, cousins and friends. He was preceded in death by his brother, Barry; father, Richard Koch; paternal grandparents, Harvey and Martha Koch; maternal grandmother, Hazel Hughes; grandfather, Phillip Anderson; and uncle, Barry Anderson. Memorial services begin at 11 a.m. Saturday at Prince of Peace Lutheran Church with viewing beginning at 9:30 a.m., followed by a graveside service at Mount Pisgah Cemetery and a luncheon afterwards (location pending). Condolences may be sent in Tony’s name in care of Gillette Memorial Chapel, 210 W. Fifth St., Gillette, WY 82716. Condolences also may be expressed at gillettememorialchapel.com or attached to the obituary at gillettenewsrecord.com.

To order memorial trees or send flowers to the family in memory of Anthony Richard Koch, please visit our flower store.