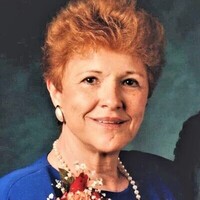 Memorial Service for Lorene Stricker will be held on July 5, 2021, at First Assembly of God Church, 601 Cary Avenue, Gillette, Wyoming at 10:00 A.M. Annie Lorene Stricker (Lorene), 88, of Gillette Wyoming, passed away peacefully on June 16, 2021, at the Primrose Retirement Community. Lorene was born on September 21, 1932, to Lewis Onis Lisenby and Addielene Glover in Americus, Georgia, the second of their three children.  In her early teens, Lorene moved with her mother, sister Edna, and step-father, Floyd Carl Baughn, to Kaycee, Wyoming, where she graduated from high school. Upon graduation, she met Richard Lee Coggeshall (Dick), and the two were married on March 29, 1952.   Lorene and Dick had three children - Debra Lynn, Bruce Allen, and Brian James.  Lorene and Dick were divorced in 1972.  Lorene was a dedicated mother who would do anything for her children and raised them to be independent, responsible, productive adults.  The hole left by her absence is impossible to fill. On August 12, 1985, Lorene married George Albert Stricker. Besides being an excellent mother, Lorene also had varied and successful working positions throughout her life.  As a young mother, she was a life guard for the community pool in Midwest, Wyoming, and worked for several years as a secretary for Standolin Oil in both Midwest and Casper.  Her other positions included secretary for a law firm in Buffalo, secretary for the Securities, and Exchange Commission in Washington, D.C., ward clerk for the Veterans Hospital in Sheridan, and secretary for a private developer in Gillette.  Her most successful and rewarding job was as a legal secretary for the Campbell County District Attorney’s Office.  Lorene retired from there in 2009 after 22 years of service. Lorene was an outgoing person who made friends wherever she was.  She was always willing to help others that she felt were in need.  Lorene was an avid Rockies and Bronco Fan.  Her interests, besides her children, included cooking, sewing, bowling, bridge, gambling, softball, golf, traveling, and spending time with friends, family, and her beloved dog, Brady.  Of all the different places Lorene lived and worked, she loved Gillette and the people. Lorene was preceded in death by her mother, father, step-father, brother Louis Lisenby, sister Edna Elsom (Duncan), husband Richard Coggeshall, husband George Stricker, and step-son Barry Stricker. She is survived by daughter Janet Britt and husband Tim, daughter Debra Sedgely, son Bruce Coggeshall and his wife Toni, son Brian and wife Bernadine, and daughter in-law Karla Stricker; grandson Adam Coggeshall, granddaughter Rachel Davis and husband Ryan,  great-grandson Remy Davis; daughter in-law Karla Stricker, her children Luke Stricker and wife Emily, Jilian Musser and husband Chris, and Morgan Johnson; great-grandchildren Hugo Stricker and Quinn Johnson. In lieu of flowers, please consider a donation to the First Assembly of God Church, the Shriners Hospitals for Children, or St. Jude Children’s Research Hospital. Memorials and condolences may be sent in care of Gillette Memorial Chapel 210 West 5th Street, Gillette, WY 82716. Condolences may also be expressed at www.gillettememorialchapel.com

To order memorial trees or send flowers to the family in memory of Annie Lorene Stricker, please visit our flower store.