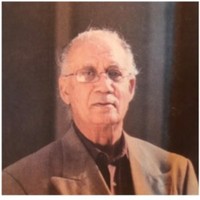 Memorial service for Amir Sancher will be at 11:30 am, Friday, November 22, 2019 at New Life
Wesleyan Church with Pastor Paul officiating. Amir 80 passed away on November 10, 2019 at the Pine Ridge Nursing Home in Pagosa Springs, Colorado. Mr. Sancher was born on April 10, 1939 to Ramji and Jamna (Davi) Das in Moga, India. He came to America at the age of 18 by himself. In 1970 he married Shirley J. Harrington. Amir attended Black Hills State University and received his Bachelor of Science degree. He went on to attend University of Montana receiving a Master’s in education, He also received a diploma from The National Commercial Lending School from the University of Oklahoma, and from The Graduate School of banking at Colorado. He was a Social Science teacher in Lander, WY. Was on the State Department of Education in Cheyenne, WY. He owned and operated Amirs Bar and Restaurant in Jeffery City. Amir was employed as a teller at First Wyoming Bank in Lusk, WY and became president of First Wyoming Bank in Gillette. Amir served as Campbell County Commissioner from 2007-2010. He was instrumental in getting the Boys and Girls Club started and has done volunteer work at his church, as a domestic violence response volunteer, as a member of the anti-harassment in the schools committee, and as a member of the parent advisory board on drug and alcohol problems in the schools. He also served as a board member of the Northeast Wyoming Red Cross. He was nominated in 2010 for people who made a difference. Amir is survived by his son, Chris Sancher; grandson, Austin Sancher; granddaughters, Anushka Dixit and Marissa Mayes. He is preceded in death by his parents, and son, Darryl Rand Sancher. Memorials and condolences may be sent in care of Walker Funeral Home 410 Medical Arts Court, Gillette, WY 82716. Condolences may also be expressed at www.walkerfuneralgillette.com

To order memorial trees or send flowers to the family in memory of Amir Sancher, please visit our flower store.