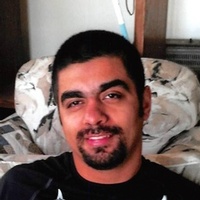 Celebration of Life for Nick Jaramillo will be held at 1:00 p.m., Sunday, March 24, 2019 at the American Legion Post #42. Nick Jaramillo passed away at his home in Gillette, WY on March 16, 2019 after battling Huntington’s disease. Ambrocio N. Jaramillo Jr. was born on August 23, 1980 to Chito Jaramillo and Mary Flores in Gillette, WY. Nick joined the Army in 2001, and in 2003 he was deployed to Iraq with the 101st Airborne, Screaming Eagles. Nick served one tour and returned home in 2004. He was proud to serve his country. Nick grew up mostly in Gillette, WY until the age of 13, when he moved to Blackfoot, ID. His hobbies were working out, movies, music, X-Box, food, and most of all spending time with his nieces and nephews. Nick had dreams of becoming a professional UFC fighter. He loved to dance and lived for Zumba. He also loved reading. Nick is preceded in death by his aunts, Rebecca Flores and  Berta Jaramillo; uncles, Ernesto and Al Hawkes; cousins, Jose Jaramillo and Katrisha Hawkes; and Grandpa Teodoro Jaramillo. He is survived by his grandparents, Joe and Pat Flores; and Teresa Jaramillo; father, Chito; mother, Mary and her partner, George Duncan; sisters, Yolanda Vialpando (Bill); and Bianca Jaramillo; brothers, Mike Flores (Krista); David Jaramillo (Shelby); Daneil Jaramillo; Jacob Jaramillo; Joshua Jaramillo; and Matthew Jaramillo; along two nephews and five nieces; and many aunts, uncles and cousins. Nick’s heart was as big as his body; and he was big on hugs. Memorials and condolences may be sent in Nick’s name in care of Gillette Memorial Chapel 210 West 5th Street, Gillette, WY 82716. Condolences may also be expressed at www.gillettememorialchapel.com

To order memorial trees or send flowers to the family in memory of Ambrocio "Nick" Jaramillo, please visit our flower store.