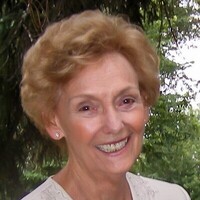 Alice McGuire passed peacefully on July 4, 2022 surrounded by the love of her family and Abby, her faithful canine companion. The family will greet friends wishing to offer condolences on Friday, July 8th from 4 to 6pm at Gillette Memorial Chapel with a private graveside service to be held on Saturday, July 9th at 11am. Alice was born on October 28, 1933 to Clyde and Marie Smith in Brush, Colorado. She grew up in Brush with three brothers and proudly led the Brush High School Beetdigger marching band as a majorette. Alice worked in banking in Denver before marrying John Curtis McGuire in Brush on August 30, 1953. John and Alice moved their young family to Gillette, Wyoming in 1959 during the early days of the Powder River Basin oil boom. After initially missing friends and family in Colorado, Alice grew to love Gillette and it became her home. She was active in the community, supported her children during their school years and was a member of the Church of Christ. She had a fantastic group of girlfriends who met for years for golf or a Friday afternoon gin game to celebrate, console and support each other. Alice was staunchly committed to the election process, first as a volunteer and later as Deputy County Clerk, proudly conducting many elections over the years. She was known for her keen sense of humor, elegance, quiet strength and homemade potato salad. Alice will be missed by her three children including daughters Susan Barlow of Sheridan, Jennifer (John) Haste of Broken Arrow, Oklahoma and son Craig (Beckie) McGuire of Highlands Ranch, Colorado. She will also be missed by six grandchildren including Lindsey King (Kevin) and James Klobe of Brooklyn, New York; John Klobe (Jessica) of Newport Beach, California; Clark McGuire and Morgan Urbanek (Paul) of Los Angeles, California; Nathan Aman (Camille) of Tulsa, Oklahoma, five great-grandchildren, brothers Clyde L Smith (Norma) of Brush, Colorado and John Smith (Lana) of Ada, Oklahoma, sister-in-law Carole Bowdre (Jim) of Myrtle Beach, South Carolina and numerous nieces and nephews. She was preceded in death by her husband, John, parents, Clyde and Marie Smith, and brother, Bob Smith. In lieu of flowers, donations may be made to the City of Gillette Animal Shelter.

To order memorial trees or send flowers to the family in memory of Alice Marie McGuire, please visit our flower store.