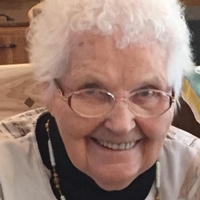 Memorial service for Agnes Schlomer will be held at 7:00 p.m., Friday, January 25, 2019 at  Christ Our Redeemer Lutheran Church, 1010 Beaver Drive, Gillette, WY. Agnes Caroline Schlomer was born on December 13, 1929 to Alfred and Anna Hanson on the family farm north of Glenham, South Dakota.   She grew up helping on the family farm.  She attended rural school through the 8th grade.
On December 3, 1950, she married Gerhard Victor Schlomer at the Norway Lutheran Church north of Glenham, where she had been a member from birth.  She was the fourth daughter of Alfred and Anna Hanson to marry a son of John and Hanna Schlomer!
Agnes and her husband Gerhard moved to Rapid City, SD in 1951 and back to the Glenham area in 1952. In 1957 they moved to a farm north of Herried, SD and farmed for three years.  Agnes helped with milking the cows and other farm chores while raising her family. In 1960, the family moved back to a farm southwest of Glenham and she continued to farm and milk cows.
She enjoyed painting and she and her sister Myrtle painted many homes, inside and outside, around the Glenham and Mobridge, SD area.  She also enjoyed sewing, crocheting, playing cards, visiting with family and friends.  With such a large family, Agnes was an accomplished cook.  There were no “strangers” to her home - she made everyone feel welcome.  Agnes had a happy disposition.
After getting married to Gerhard Schlomer, she was a member of St. Jacobi Ev. Lutheran Church in Glenham, SD and active in their women’s group, until she moved to Gillette, Wyoming in March of 2016 where she attended Christ Our Redeemer Lutheran Church until her death on January 18, 2019.
She is survived by her daughter-in-law, Carol (Marvin) Schlomer of Glenham, SD; one daughter, Marilyn (Ralph) Randall of Gillette, WY; four sons, Marco (Susan) Schlomer of Upton, WY; Marlo (Jelayne) Schlomer of Gillette, WY; Marlin (Peggy) Schlomer of Windsor, CO, and Marion (Corrine) Schlomer of Mobridge, SD; 21 Grandchildren; 46 Great Grandchildren; and 2 Great Great Grandchildren; sister Jennie Carlson, brother Clarence Hanson, brother-in-law Victor Schlomer, and sisters-in-law Josephine Hanson, Maria Schlomer and Lorraine Fowler.
She was preceded in death by her parents, husband Gerhard, son Marvin, 2 brothers, 6 sisters, 1 granddaughter, one granddaughter-in-law, and one great granddaughter. Christian Victory Funeral Service on Feb. 2, 2019, at 10:00 a.m. at Zion Lutheran Church, 620 9th Street West, Mobridge, SD. Memorials may be sent in Agnes' name in care of Walker Funeral Home 410 Medical Arts Court, Gillette, WY 82716
To order memorial trees or send flowers to the family in memory of Agnes Caroline Schlomer, please visit our flower store.