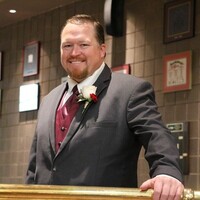 Memorial service for Adam Coleman will be held at 10:00 a.m., Saturday, February 19, 2022 at Gillette Memorial Chapel with Pastor Dan Knust officiating. Adam Earl Coleman, 47, from Gillette, Wyoming entered heaven on February 14, 2022, at Presbyterian St. Luke’s Hospital in Denver, Colorado.  Adam was born on December 16, 1974, to Leonard Coleman and Cass Smith in Casper, Wyoming.  He attended school there until 7th grade when they moved to Sheridan where he became a Bronc.  Adam was a stellar football player; this is where he started to find the value of hard work and a team.  Adam graduated from Sheridan High School in 1993.  He then attended Sheridan College, and over time, the School of Hard Knocks where he mastered the life of a mechanic, entrepreneur, and businessman. Adam married Jennie Strout in June of 1995. Eventually they moved to Gillette, Wyoming, and had three children Hannah, Courtney, and Andrew.  Adam could not be any prouder of his children, who they have become, and their accomplishments.  In that time, Coleman Field Services was started, in which his success was noted through the Powder River Basin.  In 2011, Adam and Jennie went their separate ways and became co-parents.   Adam was more ambitious than most and his zealous witty mind never ceased to surprise anyone.  His love for his family was never hidden, including the family he found along the way through work and friendship.  From family dinners, camping trips, Razor thrill rides, and never missing a photo opportunity, Adam had a huge heart and if you were in his circle, you knew it.  He truly would drop everything and help if he could...even moving, which he hated!  When his grandchildren came into this world, it was a whole new ballgame for Adam. You would have thought they hung the moon. Each time they came in the room, you would see his big ol’ heart swell.  “Papa’s” hugs were the cure all. Adam took a lot of pride in being a teacher to anyone who sought him out.  From teaching his babies to walk, to being compassionate and standing up for what you believe in, dirt bike lessons for his nephews, being the best that you can be in whatever comes your way, and encouraging his employees to keep trying until you get it right.  Adam was always up for a challenge, but… if you were to challenge him, don’t plan on winning because he made sure you wouldn’t have a chance.  There was always a scientific way to show “you” were wrong. Adam was always at home in the mountains, rip roaring around on anything he could find.  With no fear, Adam would set out to conquer that unconquerable hill with his “I didn’t buy it for resale value”,   “When in doubt throttle out”, and “Never go half-ass, always go full-ass” mentality.  In the last few years, Adam had been dating Joy Tate Haskell.  They truly enjoyed the adventures that they made together.  The love that they had for each other was what they thought would be forever.  Another prideful moment for Adam, was his successful role as branch manager of Arnold Machinery. He literally could sell a piece of machinery out of a porta-potty and was proud of that.  Adam was wicked smart, and his ability to remember information was savant-like. To say that Adam will be missed by all that knew him is an understatement.  He has touched so many lives with his whit, charm, and love.  He will never be forgotten, and his love will live on. Adam is survived by his: children, Hannah (Trey Osborne), Courtney (Aaron) Lounsberry, and Andrew (Courtney Michael); parents, Leonard Coleman (Cheryl Glidden) and Cass Smith; brothers Victor (Stephanie Kosmicki) and Jacob (Tawnya) Coleman; grandchildren, Mason, Jaxson, and Allison Lounsberry; girlfriend, Joy Tate Haskell and her son, Tristan; grandfather, Glen Clark, along with numerous aunts, uncles, cousins, and friends. Adam is proceeded in death by Terri Coleman, Joann Clark, Betty and Loren Coleman, Delaney Coleman, Uncles Irvin Clark, Eddie Coleman, Leroy Coleman and Daniel Coleman and Aunt Sandy Coleman. Memorials are suggested to benefit St. Jude's Children's Hospital. Memorials and condolences may be sent in care of Gillette Memorial Chapel 210 West 5th Street, Gillette, WY 82716. Condolences may also be expressed at www.gillettememorialchapel.com

To order memorial trees or send flowers to the family in memory of Adam Earl Coleman, please visit our flower store.